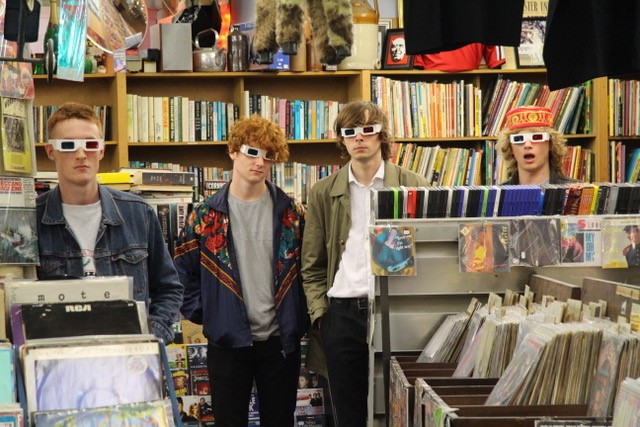 First of all, how is everyone? Does life feel strange now we’re slowly coming out of lockdown?

We’re pretty good. I guess it’s just hard to keep yourself busy but everyone’s in the same boat so we’re not too worried. Just sad there are no shows to play, it’s the only time we’d leave the house.

You guys are from Warrington, do you find that your music is influenced by your surrounding cities of Liverpool and Manchester?

Somewhat I guess, it’s hard not too because their music scene is really popping off in both places and they both have their own thing going on. You end up playing with loads of different bands from around the area and I guess it’s inevitable that some of that rubs off on you. There are some really good bands around Manchester and Liverpool at the minute, we’re really into Fruit Tones, C33s, Spilt and Mister Strange.

You just released your debut EP ‘ We Are The Lotts’, how has the reception been? Has it been strange not being able to play it live?

It’s been great people seem to really be down with it which is a shock for us because all the bits and bobs we’ve brought out in the past no one seems to give a shit but I guess this is the only release we’ve put some effort behind so it shows a bit of work can go a long way.
It’s been weird not playing a show for so long because we used to gig so much before lockdown that it was just like a lifestyle and it’s all we really got up to so being out of that routine is really hard because now I have to find stuff to fill the time.

"The beauty of recording live is it only takes the length of the song."

Can you tell me a bit about the recording process? What was it like working on so many songs in such a short amount of time?

It’s a hell of a lot easier than doing it in stages, the beauty of recording live is it only takes the length of the song (unless we balls up a take which happens a lot) whereas usually, people would spend a day or two on one song. I think our record is like 12 songs in one day at Rockfield. We don’t just record live because it’s easier. I feel like a more pure and rawer sound to it like there’s like nicks and mistakes and noise bleeding that just wouldn’t be possible if we all did it individually.

Is there anything else you want to add?