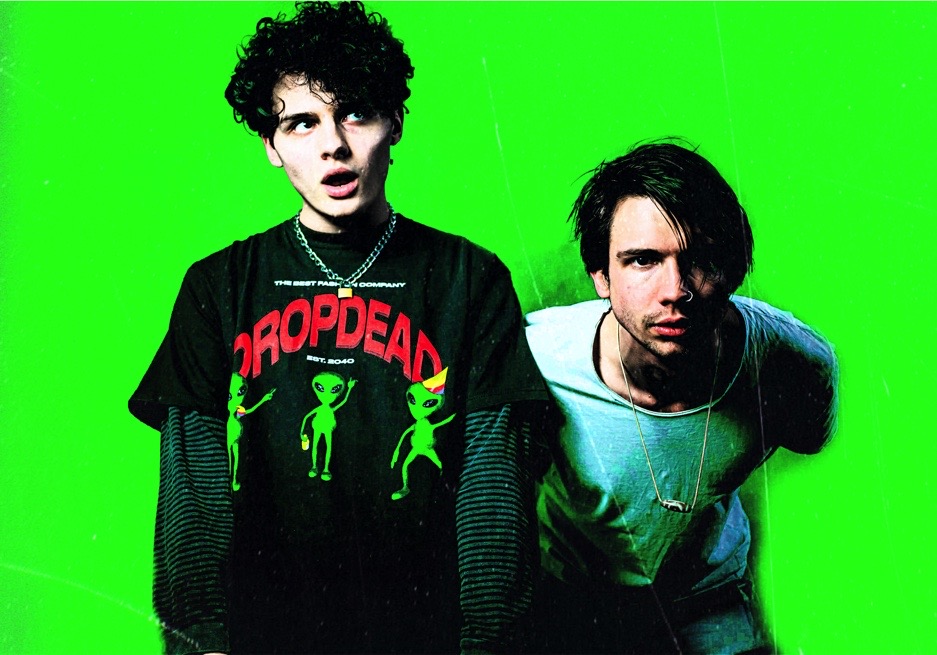 1. Before Crashface, you guys were in a band called Freakouts, how did that band ending progress into this new project? Are there any similarities in the music?

CHARLIE – You know when something you care about has run its course, so that’s all that happened there. After that, it was so clear to me that I didn’t want to stop creating or writing, so I joined a couple of different bands and tried to keep myself as busy as I could until eventually, I decided on the sort of project I wanted to create. In terms of musical similarity, The CRASHFACE sound is levels above what I expected it would be and is always changing, so sure there are a few things, but it’s mostly just the punk attitude that carried over. Then again I’d say that’s more of a personality thing. I still shout a lot though.
OTTO – I’ll always have fond memories of that project. We did some amazing stuff, some not so amazing stuff and spent a lot of time driving up and down the country in my mum’s old Prius. Once that had come to its natural end, Charlie and I went off and did our own things for a bit. Then when he came to me with some demos for what would eventually become CRASHFACE, it just gelled and worked so well immediately that it became a joint venture. What blows my mind about this project is how ambitious the songs are, and how no two are the same. That “fuck people telling us what to do, we’re going to write and look how what WE want” aspect still holds strong in both our minds, but we are a load more open to who we work with.
You launched Crashface in lockdown 2020, where do you think the band would be if it had been a normal year?
CHARLIE – In all honesty, we’d probably only have a few singles out, and we’d still be trying to define our way of doing things. Obviously, it’s been a terrible year, but getting months on end interrupted to totally commit to something is really valuable. I know a lot of people, artists included, that have been able to make the best they can out of all this time, and it’s really encouraging to see.
OTTO – I think we were incredibly lucky to have not only the time, but the means of making all this happen from our flat has been really interesting to experience. It challenges all the notions the Industry had in place before and the way I was taught. If you love something, make it work and take advantage of everything you can no matter the situation; for us, it was time.
You’ve just released your latest single Cold, how’s the reception been?
CHARLIE – It’s been really great! To be honest, it’s been great with every track, people are looking to music and just art, in general, more than ever these days. I’m just glad we can actually release a song we love and everyone else is just as psyched.
OTTO – Mad. I think the real tell of a song’s popularity, or whatever, is at shows. It’s pretty obvious when something you play has a great reception in a room full of people enthusiastic about your music. It’s one of the tracks I’m most looking forward to playing live.
Can you tell us a bit about the video? Who came up with the idea?
CHARLIE – So I came up with the idea in about 5 minutes. I basically just wanted to find the nicest, boujeest looking place I could and film us acting totally obnoxious. It’s stupid but it was so fun. In the gallery we shot at, there were actually 2 sculptures in that room we were throwing ourselves around that cost £1mill! EACH. If we got them on camera we’d have to pay the owners like stupid money to use the footage, so we were very careful we didn’t, and totally didn’t get a few pictures with them afterwards or anything. We shot it with Jessie Rose who is just so good with a camera too, so she did most of the heavy lifting. Check out her work!
OTTO – The lighting is definitely my favourite aspect of the video. We walked into this room that Charlie had found, so we rented it for a few hours. We show up and there was this massive stained glass window. The clouds parted halfway through the video, and the sun just barrelled through in blues, oranges and reds. It was a pretty sick location. Then the green slime… ew.

"fuck people telling us what to do, we're going to write and look how what WE want"

How would you describe your genre?
CHARLIE – I’ve really tried thinking about this but I always just end up going with rock. Boring I know, but the style changes with each track, and the only things they really have in common is the typical band set up and that they’re loud. Genres are really a thing of the past I feel now anyway. Artists these days are capable of so much more than just one genre or sound, and they have the technology and freedom to use that variety to their advantage. I just think we sound like CRASHFACE.
OTTO – Loud. Obnoxious. Heavy. In-your-face. Sexy.
Who is your dream artist to collaborate with?
CHARLIE – It’s a toss-up between Frank Iero and Grimes. I think. That’s another one that is always changing too though, like there are so many sick artists I’d love to work with. Or Daft Punk. I’m gonna stop now.
OTTO – Too many to name… I’m going to say Brian Molko. Placebo are up there with the best of them and I think he’d add such an interesting dynamic to a track.
Anything else you’d like to add?
CHARLIE – YEAH! We just announced our debut EP ‘HEAVY INFECTIOUS’ is out June 25th! AND we’ll be touring the UK in November, so don’t be stupid and grab a ticket at crashface.online/live! And drink water!
OTTO – What he said.
TICKETS TO SEE CRASHFACE IN NOVEMBER ARE ON SALE NOW: 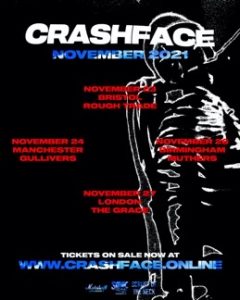